My little man turned one today, and we threw him a great party. He loves anything with wheels, so we focused on "things that go". 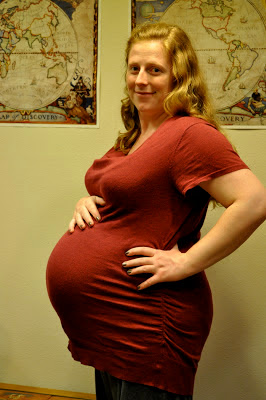 This photo was taken about a year ago, when I was two weeks away from my due date with Atlas. I wanted my hugeness documented, but I was too self conscious at the time to share it publicly. I thought I looked too puffy, and even my most accommodating maternity wear was looking tight over my belly. I'm pretty sure the camera had a hard time bringing my face and bump into focus simultaneously. Now I find it amusing. Becoming a mother has changed my perspective in many ways, one of which is what I'm comfortable sharing. I was just shy of 200 lbs.

We're celebrating Atlas's first birthday this upcoming weekend. We decided on a wheel theme - from wagons and bicycles to trucks and trains. My week will be full of party planning and baking. I'm excited. Stay tuned for pics.
Posted by Jesse at 7:00 AM 1 comment:

Email ThisBlogThis!Share to TwitterShare to FacebookShare to Pinterest
Labels: parenting

Continued crochet efforts: this warm winter wear is for a cute little one being dedicated today. 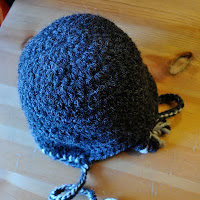 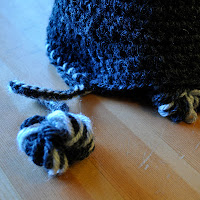 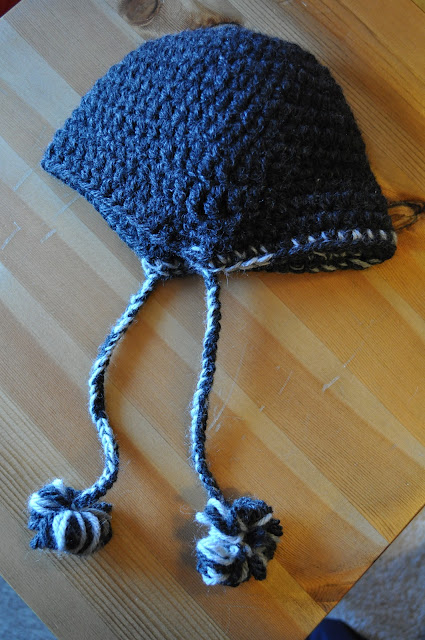 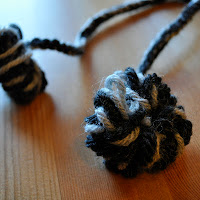 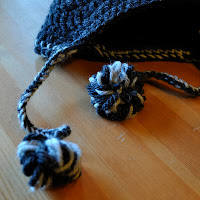 Our cat loves chasing balled baby socks around the apartment, as if we don't lose enough little socks from Atlas removing them himself at odd times in random places. This toy is meant to distract her from the socks... though as I type, I'm noticing a pair in the kitchen by her food dish.

I made a crochet sphere based loosely on this pattern. I started with a magic loop instead of chains so that I could add a bit of cotton batting and catnip as stuffing before tightening it up. 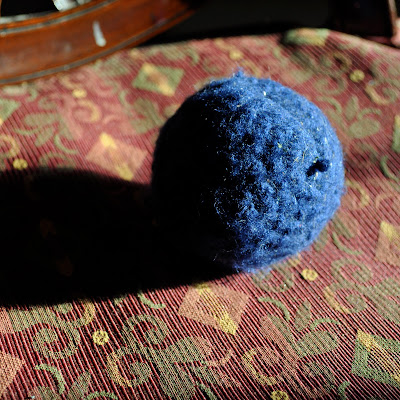 So far it seems to be a hit. Just enough of the catnip comes out to keep her interested, and the yarn catches on her claws without snagging too much. Perhaps when she tires of it, I'll look up a crochet mouse pattern (or make one up) and include an extra long tail for her to chase. 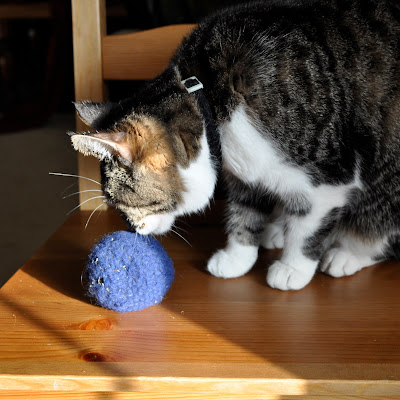 Email ThisBlogThis!Share to TwitterShare to FacebookShare to Pinterest
Labels: crafts

I bought a big sweatshirt from Walmart at the beginning of the summer (it was clearance on top of already cheap) with a refashion in mind for myself, but I ended up using it to make a cute as pie sweatsuit in about 12-month size. 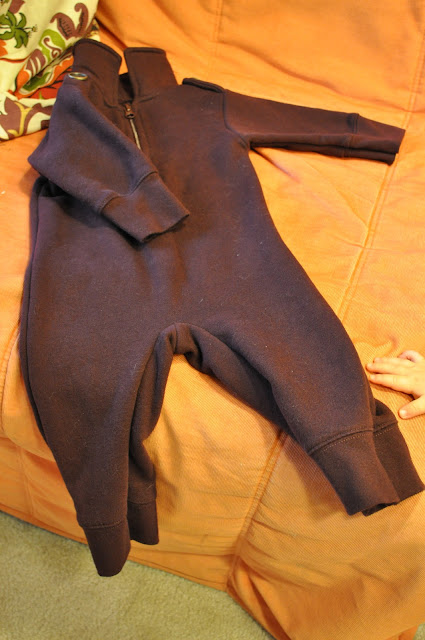 I am planning to make a Halloween costume for Atlas - a furry creature to be revealed at a later date - and I want to base the design on a cozy one-piece outfit we already have. Since this is my first time drafting a pattern, I figured a practice round would be a good way to start. I opted for the sweatshirt remodel because the half zipper option allows me to avoid any of my own zipper/buttons/snaps. As a result, it's not the most diaper-change-friendly outfit.

I started by tracing the original garment - turned inside out and flattened on a roll of Ikea craft paper. I left room for seam allowances and hems.

The design is super simple - a single front panel cut on a fold, opposite back panels, and sleeves. 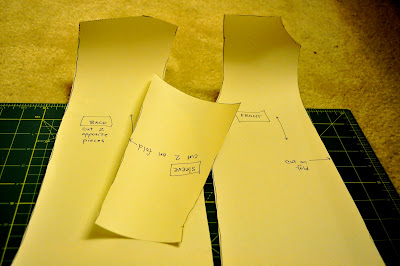 I cut the pattern out of the XL sweatshirt utilizing the front zipper, collar, and even the cuffs. It took a bit more time to get everything lined up correctly, but in the end it saved me a bunch of effort hemming and finishing the garment. 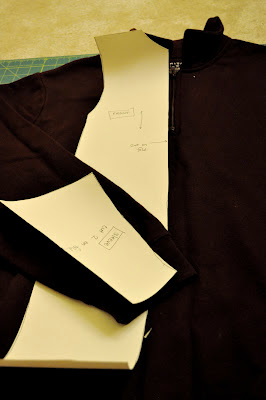 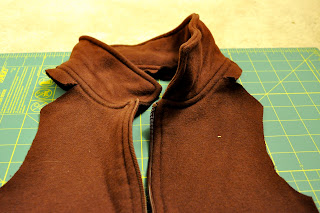 I couldn't resist a final touch of style. I had plenty of extra fabric to make little shoulder things - what are they actually called? Anyone? 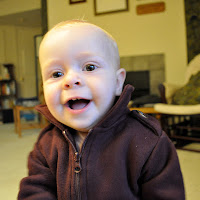 Add buttons and an adorable almost-one-year-old! 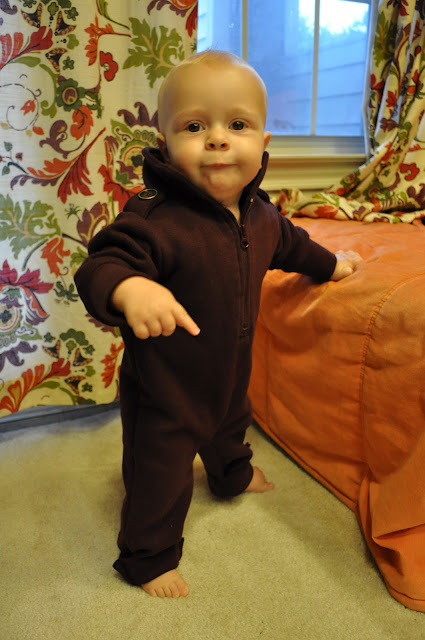 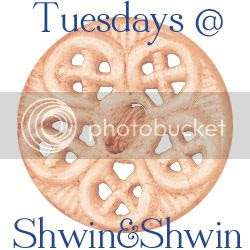 It seems like everyone on Pinterest is thinking about wrapping their Christmas presents already. I've seen pins about color coding wrapping paper, photo labels, and using materials other than paper and a handful of others I'll keep in my back pocket. This weekend I tried my hand at a gift bow. It's a bit sloppy, but fun. I also used a fold in the gift wrap to make a card pocket. Clever! 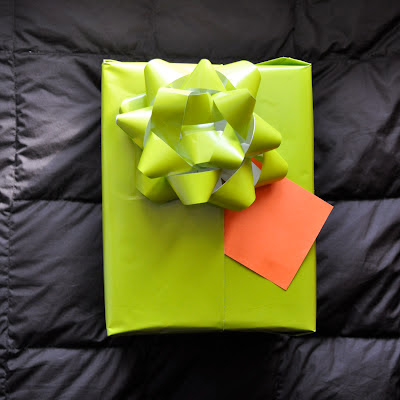 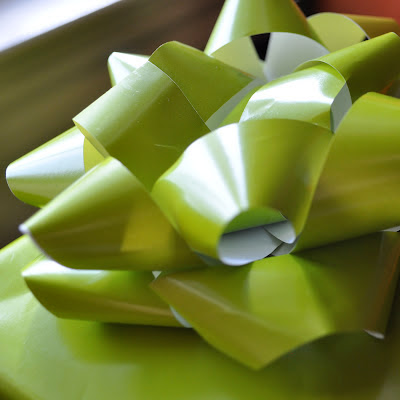 This wrapping paper was $.99 at Ikea, and they carry several other bright colors and a few prints.
Posted by Jesse at 6:30 AM No comments: